This privacy policy sets out how Leman Micro Devices SA (LMD) uses and protects any information that you give to LMD. LMD is committed to ensuring that your privacy is protected. Should we ask you to provide certain information by which you can be identified when using this website, then you can be assured that it will only be used in accordance with this privacy statement. LMD may change this policy from time to time by updating this page. You should check this page from time to time to ensure that you are happy with any changes. This policy is effective from 1 January 2017.

We may retain the following information:
Your name, email address and telephone number, and any message that you enter into the contact form
Other information that you provide to us

What we do with the information we retain

We are committed to ensuring that your information is secure. In order to prevent unauthorised access or disclosure we have put in place physical, electronic and managerial procedures to safeguard and secure the information we collect online.

Links to other websites

Our website may contain links to other websites of interest. However, once you have used these links to leave our site, you should note that we do not have any control over that other website. Therefore, we cannot be responsible for the protection and privacy of any information which you provide whilst visiting such sites and such sites are not governed by this privacy statement. You should exercise caution and look at the privacy statement applicable to the website in question.

If you have agreed to us retaining and using your personal information, you may change your mind at any time using the contact form.
We will not sell, distribute or lease your personal information to third parties unless we have your permission or are required by law to do so. You may request details of personal information which we hold about you under the Data Protection Act 1998. A small fee will be payable. If you would like a copy of the information held on you please write to Leman Micro Devices SA, EPFL Innovation Park Building I, 1015 Lausanne, Switzerland.

If you believe that any information we are holding on you is incorrect or incomplete, please write to us or use the contact form as soon as possible, at the above address. We will promptly correct any information found to be incorrect.

eHealth has the potential to make a radical change to health and healthcare but up to now its impact has largely been incremental because it has concentrated on:

The few honourable exceptions are too expensive for widespread use.
Next generation eHealth will be bundled with our Smartphones and will measure clinical data to medical accuracy. Around 1 billion people per year will, by default, gain the ability to measure their temperature, blood pressure and other features of their health– just as the device that they carry with them to make phone calls and check emails can take photographs or draw a map.

The emerging devices are tools, not toys and always with us. They are regulated medical products that have massive implications for our health and a qualitative impact on the management of health services.

A lesson from history

The first real camera in a ‘phone was produced by Sharp in November 2000. It had 0.11 megapixels and took pictures like thisi No-one knew what to do with it. The only sensible use cases on the web forums were:

Recently I was walking my dog by Lac Léman early in the morning and took a picture of sunrise with my 2014 Samsung Galaxy S5. In just 14 years we had gone from an entertaining toy to a functional tool – I do not own any other camera. And film (and the companies that make it) has almost died. 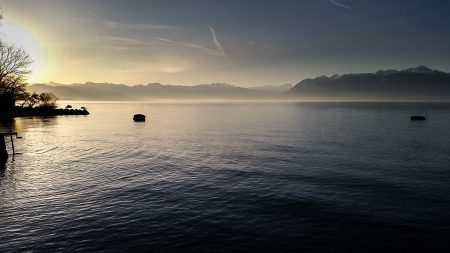 Today you would not consider buying a Smartphone that did not have one or even two good cameras, even if you do not think of yourself as a photographer. 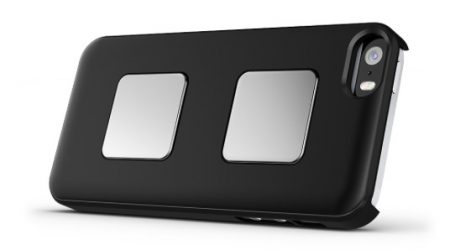 There are more than 100,000 eHealth apps for IOS and Androidii but only 1.6% of those apps are concerned with diagnosis. Even fewer actually take measured data from sensors, and even fewer than that use sensors that are integrated with the Smartphone.
Alivecor’s product comes close. It fits onto the back of a Smartphone and records an ECG signal between the two hands. It is a regulated medical device, approved by FDA in the US and with a CE mark in Europe. Equally importantly, Alivecor has an app that is also approved by Regulators for the early diagnosis of atrial fibrillation. This is not a toy; it is a diagnostic tool that can save lives by early recognition of medical conditions. Extensive research has shown that it is both effectiveiii and cost-effective – the early diagnosis results in saving of money for the health system as well.
The Alivecor product is one of the few on the market that support Dr Eric Topol’s observationiv that “We’re at an inflection point, or transition, from lifestyle health stuff to medical metrics”. But it still costs $80, which means that you only have one if you positively decide to buy it, not just because it’s there. The next step is to incorporate the sensor into the Smartphone, just as the camera and GPS receiver are incorporated, so that the consumer does not have to make a separate purchase and the sensor is always with you. There is one example, the pulse rate and SpO2 sensor built into the Samsung Galaxy Smartphones, but this has limited capability and is not a regulated medical device.
If we are to see widespread incorporation of clinically relevant sensors in Smartphones, they must be small enough and cheap enough, but still meet all the standards of accuracy and usability demanded to be a regulated medical device.
Small enough: Smartphones are typically 7 mm thick and the components are typically no more than 15 mm in any dimension
Cheap enough: even the most complex components, such as the camera, cost no more than $12.
If we start by assuming that a medical device will be expensive, it will be. “Expensive” means that not many people can afford it, so not many will be sold, so we cannot use mass production, so the device is expensive. Conversely, if we start by making it cheap, many people can afford it, we will sell a lot and it is worth using the tools that drive down the cost of consumer products. 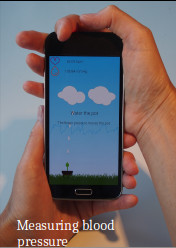 LMD’sv V-Sensor is entering clinical trials and compliance testing to satisfy the requirements of a CE Mark, FDA and global regulation. It measures blood pressure as well as pulse rate, blood oxygen concentration, respiration rate and body temperature, all to medical standards of accuracy. Its unique feature is the ability to measure blood pressure, which it does by a variation of the classic Riva-Rocci technique of occluding an artery. The variation is to use the artery on the side of the index finger, detecting occlusion optically and instructing the user to vary how hard to press rather than pumping a cuff. On test it is at least as accurate as a cuff.
The picture shows a user measuring blood pressure using a game – in this version the cloud moves across the screen to set the target pressure and the user presses on the module to move the flowerpot to collect the rain. Within around 30 seconds, the blood pressure is found. By making it a game, at home and not at the doctor’s office, it avoids the notorious “white coat syndrome” that causes artificially high readings. And it can measure much more than just systolic and diastolic blood pressure. For example, it finds the stiffness of the artery, another valuable diagnostic.
This product is small enough and cheap enough to be built into Smartphones. LMD invested millions of dollars in developing its own integrated circuit and package, which makes sense if it will then sell in Smartphone quantities but not for normal medtech sales. LMD is backed by one of the biggest makers of Smartphones and one of the biggest makers of sensors for Smartphones.

Health consequences of “not a toy” + “unintended purchase”

LMD’s product, and the many others that will follow, will make medical measurements as easy as checking your email – always with you, medically accurate and free to use. With Smartphone sales running at around 1 billion per year, very quickly most people in the world will be able to monitor their vital signs. What’s more, they will have that capability, not because they went out to buy a medical device but because it was part of another product – they acquired medical monitoring “by accident”.
This could have a qualitative impact on health. Consider hypertension or high blood pressure. Hypertension causes 51% of stroke & 45% of coronary heart disease deathsvi, which means that it causes around 7.1 million deaths per year world-wide (~ 13% of all deaths)vii. To put that in context, that is one death every 4.4 seconds caused by hypertension. It’s the “silent killer” because it usually has no symptoms until the effects are serious. 11% of US adults have undiagnosed hypertensionviii. 75% of the English population do not know their blood pressureix. But it is easily and cheaply treated – if you know that you have it.
The Institute of Health Economics and Management at the University of Lausanne investigated the impact of Smartphones able to measure blood pressure on Coronary Heart Disease (CHD) and Strokex. It found that the average man in his thirties would add around half a year to his life expectancy by buying and using a Smartphone that measures blood pressure. And there are many other conditions affected by hypertension, such as kidney damage and blindness, and many other conditions that can be detected and diagnosed using such a device. The next generation is already under development, with a one-lead ECG and measurement of heart valve timing, and a patent to add a novel non-invasive glucose monitor has been granted.

For around 50 years, life expectancy has been rising by around 2 years per decade. Ten years of all of the world’s research, medical practice, improved diets and health information add on average 2 years to our lives. Just one aspect of the emerging Smartphone technology adds 6 months. The implications are equally great for the way in which we deliver healthcare – the measurements are made by a connected device that will soon be ubiquitous. What did the Smartphone camera do to Kodak?
The key to this revolutionary change is wide availability by including the sensor and its app in the one piece of technology that virtually everyone on the planet carries – a mobile Smartphone. We are moving from the current low volume, high price business model of medical devices to the consumer world of high volume, low price. By using consumer technology we’ve brought the cost down to that of the other devices in the Smartphone – the camera, battery or screen – whilst maintaining medical quality.
Moore’s Law at last reaches medicine. Topol was right – we’re at an inflection point.